While the CDFI field is gaining investors from a wide variety of capital sources, banks remain the largest capital providers to CDFIs. Banks and CDFIs continue their long history of working together to help serve communities, enabling banks to meet obligations under the Community Reinvestment Act in the process. Among mid-sized CDFIs (the “Core Group”), which represent the largest group in the analysis that follows, median debt from banks made up nearly half of total debt. The median cost of debt for this group was 2.1% and median weighted average maturity was five years. Other sources of debt (e.g., corporations) played a meaningful role for certain CDFIs, but showed less field penetration.

Note: Other sources of capital (such as State and Local Governments, Faith Based Organizations, Insurance Companies, Pension Funds, Corporations, Individuals and Others) represented median debt percentages of less than 5% for all CDFI groups. While the median percentage was low, these sources were material to certain CDFIs.

* Banks include related foundations, which lend to CDFIs independently or alongside their related corporate entities.

** NRSRO is the acronym for Nationally Recognized Statistical Rating Organization.

*** Creditor concentration medians for single creditors do not include holders of NRSRO-rated bonds and notes. 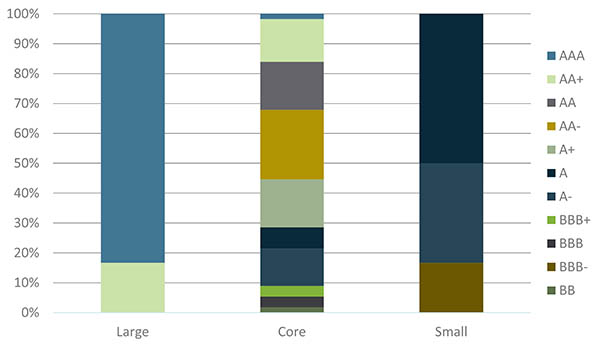 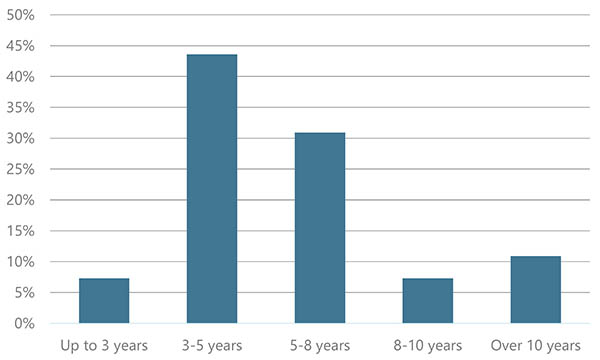 The above chart shows the distribution of weighted average maturity (WAM) of debt for the Core group. As noted, debt composition of the Core group is dominated by banks, and thus the WAM of this group most strongly reflects the remaining terms of bank loans to CDFIs. However, WAM is also influenced by federal government and private foundation debt, which are the next two largest sources of debt for the Core group. Debt accessed via federal programs can carry very long terms, which would lengthen WAM. Similarly, foundations typically provide patient capital to better achieve impact goals, which may also extend WAM.

Aeris data shows that the most common WAM are 3–5 years and 5–8 years. While original debt terms would be longer, these WAMs are a good gross proxy. These terms align well with the lending needs of most CDFIs, whose loan products typically carry terms ranging from 3 to 10 years. Shorter term loans are usually for business working capital lending and early-stage real estate development lending. CDFIs’ longest-term loans support real estate mortgages. Loan maturities rarely exceed 10 years (except when matched with targeted net assets or program debt with longer terms). Even with 10-year loan terms, most mortgages have longer amortization periods to align with property cash flows. At maturity, mortgages may then be refinanced by traditional market lenders, after the properties have established cash flow and built equity, or may be fully underwritten and repriced by the CDFI if it chooses to self-refinance these loans.

Other debt characteristics observed by Aeris are as follows:

New government programs such as the $20 billion Greenhouse Gas Reduction Fund established in the Inflation Reduction Act of 2022, as well as emerging collaborative capital markets initiatives targeting CDFIs, may be influential sources of debt for CDFI loan funds in the future. However, the foundational capital sources that have built the industry will likely remain critical.

This is the tenth in a series of CDFI trend reports tracking CDFI performance. Access the archive of Aeris CDFI loan fund trends reports.

Are you an investor with questions about the performance of your own CDFI portfolio? We are eager to hear from you. Contact us if you would like to discuss your portfolio, ask questions, or hear more about what we are seeing through our CDFI ratings and data collection work. Are you a CDFI loan fund that would like to participate in our database? Let us know.