As of 9/30/21, CDFI loan fund performance continued to shine. While quality was strong, loans outstanding began to decrease.

Aeris has examined CDFI loan fund performance through 9/30/21 using sector-specific median measurements in the Aeris® Explorer peer analytic tool. In September 2021, the Delta variant of COVID-19 was in retreat in most areas of the country. Many of us were preparing for what we thought would be a ‘normal’ holiday season, and to most, Omicron was still just a Greek letter. How were CDFIs performing in that moment?

Despite this strong performance, we are starting to see some slowing:

Currently, Aeris is receiving and processing 12/31/21 data from reporting CDFIs. Our expectation is that these data will continue to reflect strong CDFI performance trends. However, we continue to closely watch small business loan portfolios, as government and philanthropic support for small businesses sunset. We do not anticipate a significant impact on CDFI financial performance from the Omicron variant at yearend, given the strength of CDFI performance at 9/30/21. Going forward, we will be watching 2022 data closely to determine if the CDFIs with shrinking loan portfolios experience a return to growth.

For all three CDFI lending groups*, median and average delinquency rates remained very low, and CDFI portfolio performance was consistent with or better than historical norms.

At 9/30/21, delinquency rates among both community facilities/commercial real estate and housing development lenders were in line with or below historical norms. The median for greater-than-30-day delinquencies for community facilities/commercial real estate lenders had dropped to 0.1%. That compares favorably with the historical norm, which has varied over time but has tended to be below 1%. For housing development lenders, greater-than-30-day delinquency rates have historically remained below 2.0%. While this rate ticked up from 0.7% to 1.0% between 12/31/19 and 12/31/20, it declined to 0% at 9/30/21.

Unlike with small business lenders, the allowance for loan losses among community facilities/commercial real estate and housing development lenders remained in line with historical levels at 4%.

Except for community facilities/commercial real estate lenders, we continued to see strong asset growth among reporting CDFI loan funds through 9/30/21. For small business lenders, the percentage growth in total assets was about one-third of the level we saw for all of 2020 but was still strong at approximately 20% for both the top and bottom quartiles.

As shown in the figure below, across all sectors, contributed revenues and operating surpluses appear to be on track for yet another record year in 2021. This is remarkable in the context of the unprecedented amount of capital that CDFIs attracted in 2020. It will be interesting to see if CDFIs can sustain these high levels of contributions in 2022. 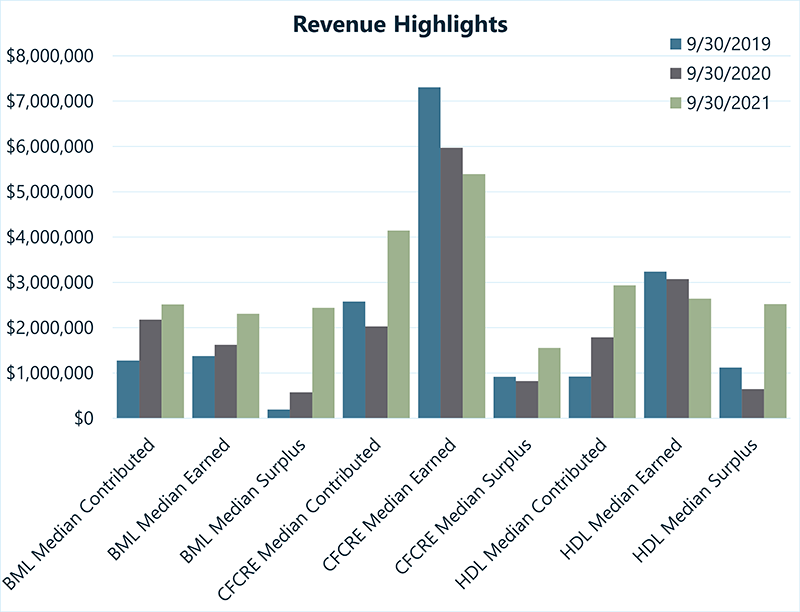 However, decreased deployment does not appear to be cause for alarm, nor is it an indication that CDFIs do not have the operational capacity to deploy capital. For 60% of the small business lenders with significant decreases in deployment, there was a corresponding decrease in PPP loans outstanding. This came as the SBA processed and approved PPP loan forgiveness and repaid CDFIs, causing a 30% overall decrease in PPP loans outstanding. For some small business lenders, decreased deployment was part of the normal, variable pattern associated with large capital infusions; deployment increases over time as the CDFI converts that new capital into loans.

Are you an investor with questions about the performance of your own CDFI portfolio? We are eager to hear from you. Contact us if you would like to discuss your portfolio, ask questions, or hear more about what we are seeing through our CDFI ratings and data collection work. Are you a CDFI loan fund that would like to participate in our database? Let us know.